Asserting the rights of legal observers

The arrest of a legal observer in Sydney in June 2022 has highlighted the need to continually assert the rights of independent legal observers to monitor police without interference or obstruction.

The legal observer was monitoring the policing of climate protests for Legal Observers NSW when she was arrested by NSW Police and charged under new anti-protest laws.  Despite being clearly identified and stating multiple times that she was a legal observer, police proceeded to arrest her.

Behind-the-scenes advocacy from Legal Observers NSW, MALS, Amnesty International Australia and her legal representation resulted in NSW police withdrawing the charges several weeks later for “reasons of public interest”. Whilst this was a good result, the incident demonstrated that more is required to ensure legal observers are able to monitor, document and report on police behaviour safely and unhindered.

In many ways the arrest of a legal observer is akin to the arrest of a journalist at a protest. It contravenes international human rights standards and is something that should not be tolerated.

Police in Australia have, at times, demonstrated a distinct lack of awareness of and respect for the role of independent legal observers.

In October 2011, a legal observer with the Occupy Melbourne Legal Support Team (OMLST), identified by a hi-vis legal observer vest, was walking in the wide space between a line of police and protesters occupying the City Square. Without warning, riot police were given the direction to advance and the legal observer was pushed over and trodden on by police as they charged over her. Her walking stick was kicked away and she sustained injuries as part of the assault.

In July 2015, a MALS legal observer had their mobile phone snatched out of their hands by a Victorian Police member from the Operations Response Unit (ORU) during counter-protests to the Reclaim Australia rally.  The legal observer was pushed and yelled at aggressively by the police member. The mobile phone was later found smashed a short distance away.

At the protests outside the IMARC (International Mining and Resources Conference) in Melbourne in October 2019 there were a number of incidents of ill-treatment and obstruction of legal observers by police members.  In one incident, a MALS legal observer, identified by a pink hi-visibility vest with “Legal Observer” labeled across the back and front, was told by a police member to “move away or be arrested,” even though the observer was on the sidewalk with other spectators.

Other legal observers reported being pushed and shoved by police and very nearly being sprayed with OC foam (pepper spray) whilst observing during the three days.

In August 2021, the NSW Council for Civil Liberties (NSWCCL) published a public letter to the NSW Police Commissioner calling upon NSW Police to specifically recognise the role of legal observers from Legal Observers NSW.  The letter raised concerns over the treatment of volunteer legal observers by police at a number of protests in Sydney over 2021 including a number of incidents wherein police stopped legal observers from recording specific interactions between protesters and police, as well as generally intimidating and confronting behaviour towards legal observers.

NSWCCL stated that the function of legal observers is “neither respected or understood properly by Sydney police and immediate action needs to be taken.”

“While the presence of legal observers is generally requested by protest organisers, they act as an independent part of the protest itself and do not take part. Generally unpaid volunteers, their role is to improve the accountability of the police and protect the rights of the protesters. Legal observers hand out information cards, brief people about their legal rights and document the protest through note-taking, photographs and video interactions. They are recognised as human rights defenders by the Office of the United Nations High Commissioner for Human Rights and therefore fall under the protection of the Declaration on Human Rights Defenders.”

NSWCCL called on NSW Police to:

Civilian legal observers are recognised as human rights defenders and therefore fall under the protection of the United Nations Declaration of Human Rights Defenders.

Australian police services therefore have an obligation to permit legal observers to fulfil their role unhindered and without obstruction. Legal observers don’t enjoy any special legal status; everyone on the street, from passersby to journalists, enjoys the same legal right to observe and document public police actions. But the work legal observers do is important and is increasingly recognised by UN bodies in protecting the rights to peaceful assembly around the world.

The practice of independent scrutiny of police powers is recognised by United Nations Human Rights Committee (UNHRC). The UNHRC describes monitoring as necessary for the exercise of the right to peaceful assembly, emphasising the duties of law enforcement officials to “[protect] journalists, monitors and observers”. (UNHRC, 2020, General Comment No. 37).

The UNHRC has also stated that observers “may not be prohibited from, or unduly limited in exercising their functions…They must not face reprisals or other harassment” (UNHRC, 2020)

The UNHCR states, “The role of journalists, human rights defenders, election monitors and others involved in monitoring or reporting on assemblies is of particular importance for the full enjoyment of the right of peaceful assembly. Those persons are entitled to protection under the Covenant…. Even if an assembly is declared unlawful or is dispersed, that does not terminate the right to monitor.”

A number of important legal cases internationally have highlighted the need for police to formally recognise and respect the role of legal observers.

In June 2020 twelve legal observers from the National Lawyers Guild in the United States were arrested in New York. The legal observers were handcuffed, thrown to the ground, their legal notes riffled through, and were forced to sit where they could not observe the mass arrests and police violence taking place before being moved on.

This incident was unusual and occurred despite the New York Police Department (NYPD) recognising that properly-identified legal observers are entitled to courtesy and cooperation, including free access through police lines at demonstrations.

The NYPD Patrol Guide states; “Observers shall be permitted to remain in any area, or observe any police activity, subject only to restrictions necessitated by personal safety factors, as determined by the incident commander.”

The group of legal observers were later awarded 49,000 USD after a federal lawsuit against the New York City was resolved in July 2022.

Also, in June 2020, a District Court Judge in Oregon issued a order to the Portland Police Bureau (PPB) enjoining them from “arresting, threatening to arrest, or using physical force” on anyone whom they “know or reasonably should know is a Journalist or Legal Observer” unless there’s probable cause to think they’ve committed a crime.[1]

In early 2021four legal observers, all volunteers with Black Protest Legal Support (BPLS), were arrested at protests in London and handed fines for breaches of coronavirus regulations. Their arrests prompted a legal challenge – supported by Liberty, the UK civil rights group – arguing that the legal observers ought to have been covered by an exemption and that their arrests had been unlawful.

Sam Grant, the head of policy and campaigns at Liberty, said at the time that arresting legal observers was “an intimidatory tactic to deter protest”.

He said: “Legal observers help to make sure protesters’ rights are respected and police act within the law. If officers believe they are acting lawfully, they should welcome this scrutiny.”

The Metropolitan police later dropped the charges against the legal observers and stated publicly that legal observers at protests have an important role to play in the independent scrutiny of policing. It is believed to be the first time a police force in the UK had admitted the role played by legal observers during protests.

Continual assertion of our role and rights

Legal observers, understandably, have a tense relationship with police as we are there to observe and report upon their actions and hold them to account if they act unlawfully.

Thankfully, the cases above are rare. In most cases, in Victoria, Australia, MALS legal observers are able to move freely around protest events and are often able to position themselves behind police lines in places that allow ideal observation. Senior police and forward commanders are courteous and respectful to legal observers at most protests.

However, we must continually assert the rights of legal observers to carry out our role safety and without interference or obstruction.

The more police understand our role- and their obligations to respect our role- the more likely we are to deter abuses.

We act assertively whenever a legal observer is hindered or obstructed by police, alerting the Forward Commanders on the ground to the incident, as well as human rights bodies, accountability agencies, and Members of Parliament and Ministers.

MALS uses every opportunity to educate frontline police as well as senior commanders about our role. We hand out a Statement to All Parties notice at each protest that clearly spells out our role and protocols (pictured below). 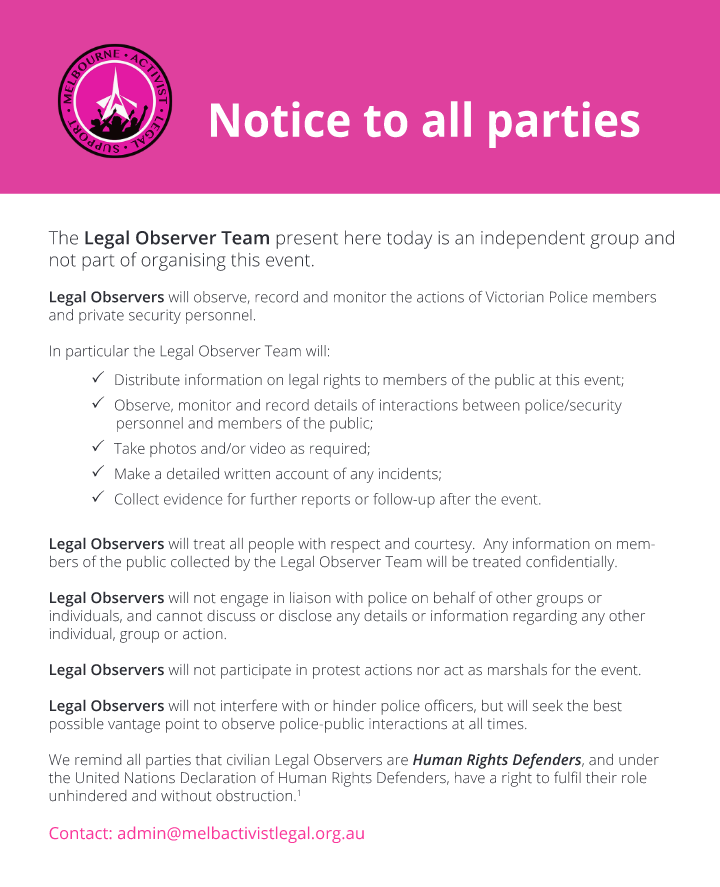 In 2019, after the IMARC protests in Melbourne, MALS called upon Victoria Police to specifically include the role of civilian legal and human rights observers within the Victoria Police Manual Crowd Control Guidelines (VPMG) and for forward commanders to brief operational members of the requirement to ensure the safety and access of legal observers who may be present at protest events.

As the New York case above demonstrates, even with formal recognition by police, mistreatment and obstruction of legal observers can still occur.

Even if police do acknowledge the role of legal observers formally it remains vital that legal observer teams remain clear on our mandate, stridently independent and continually assert our internationally recognised rights to monitor, document and observe.