What is ‘kettling’ & why is it such a problem?

Kettling is a controversial containment technique used by police during protests that has the purported purpose of de-escalating tensions, but has come under heavy criticism for having the opposite effect.

It involves the police confining protesters (and sometimes bystanders) to a specific area, with those caught inside only being able to leave at the decision of the police.

This containment is often achieved by the police lines creating a ring around the protesters, or to hold or push them back into a certain area, but kettling has also been created by using barricades such as metal fences. Kettling may be used upon the entire protest, or smaller groups can be separated from the protest and confined simultaneously. Police have in the past also pretended or threatened to kettle as a tactic to get the protest to disperse.

Police argue that kettling works to manage a protest and “keep the atmosphere calm” by breaking up the protest into smaller groups, and then releasing people gradually or performing mass-arrests. In reality, kettling is a protest suppression technique which instead increases tensions, often resulting in more unsafe and volatile conditions at protest events.

With a lack of cases regarding kettling in Australia, it is difficult to know exactly what power police use when they are kettling (for example, how long they may be able to hold people in a kettle and what force they may use when creating a kettle). The power to kettle in Australia likely arises from police powers at common law in conjunction with Section 51 of the Victoria Police Act 2013 (Vic), which gives police officers a broad range of powers and duties under the common law, and these have been interpreted to include “the duty to preserve the peace, the duty to protect life and property, the duty to prevent crime, the duty to detect crimes when they occur [and] the duty to apprehend offenders.” The police also have the ability to arrest people, and use “reasonable force” to effect an arrest to the extent that the force is “reasonably necessary and proportionate to the situation.”

Despite the lack of cases concerning kettling in Australia, it is likely that the police would rely on their common law powers, especially that of the broad power to prevent breach of the peace.  In R v Howell it was held that a breach of the peace occurs when “harm is actually done or is likely to be done to a person or in his presence to his property or a person is in fear of being so harmed through an assault, an affray, a riot, unlawful assembly or other disturbance.” Various cases have supposedly confirmed that the police have the power and duty to prevent breaches of the peace.

The actions of police in preventing a breach of the peace must be proportionate to the perceived threat. Section 462A of the Crimes Act 1958 (Vic) requires that the level of force used to “prevent the commission, continuance or completion of an indictable offence” must not be disproportionate to the objectives of the offender, and this seems to align with the common law requirements.

However, the legal construct of breach of the peace is extraordinarily vague and open almost entirely to the police member’s interpretation and their ‘reasonable belief’ test. Hence, police have often used ‘preventing breach of the peace’ as a justification to arrest, move-on or use force against protesters. Such justifications likely extend to the practice of enacting kettling.

The common law does provide some guidance on what may be considered a breach of the peace. Common law courts (in Australia and the United Kingdom) have held that the following do not, in themselves, constitute breaches of the peace:

In the Max Brenner Case the court held that what constituted a ‘threat to public order’ needed to take the rights of protesters to express their political beliefs into consideration. A colourful, loud, active protest that attracts public interest and generates robust discussion may be lawful and legitimate even if it causes inconvenience to the public. 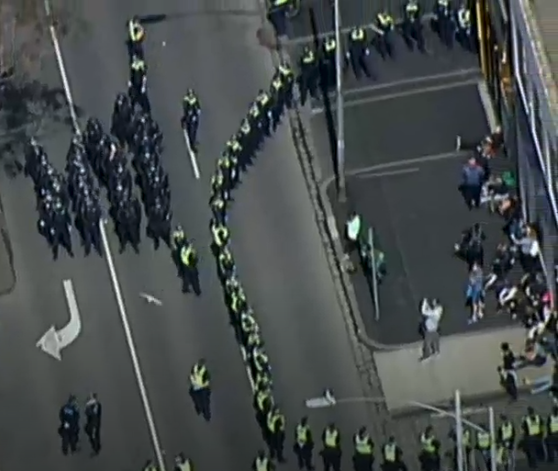 The practice of kettling has been widely condemned, with many organisations commenting that tensions have instead increased through the use of kettling, and that protesters have been subjected to containment for unreasonably long times and/or in unsafe conditions.

Kettling was recently used at Extinction Rebellion(XR) protests in Victoria in September 2019.

The MALS Statement of Concern after that event asserted that “that the police cordon established by Victoria Police around this protest from 12:15 until 15:00, unjustifiably limited people’s right to assemble together peacefully in order to protest. We contend  that this limitation on the right to peaceful assembly was without  lawful basis or rationale on the grounds of safety or public order. Despite a degree of ‘disruption’ caused by the protest event, this  disruption was time limited and no more significant in affect than other large rallies and assemblies held regularly in the Melbourne CBD. There was no threat to public safety present or expressed.”

Several large anti-lockdown protests in Melbourne in late 2020 were also kettled, including one on Melbourne Cup Day where 404 people were arrested.  Organisers of those protests argue that the demonstrations were generally peaceful until police began kettling protesters and tensions were heightened, leading to violence between police and protesters. They further contend that the kettling of demonstrators resulted in unsafe conditions with protesters unable to socially distance inside the kettle.

State Liberal Democrats MLC David Limbrick, who was arrested during the Melbourne Cup Day protest stated, “Unless the government wants to justify these tactics, they should ban kettling immediately and rescind the fines handed out to protesters.”

The use of kettling at the recent Black Lives Matter protests in Sydney has also been widely criticised. Police kettled protesters into a section of Central Station at the end of the peaceful protest and stopped those attempting to leave. Protesters and organisers argue that this created an extremely tense and volatile atmosphere and increased the risks for public safety while making it impossible to socially distance. Police also pepper sprayed protesters at close range, with the effects being heightened due to the limited space and the inability to leave.

Kettling was also used at the Occupy Melbourne protests in Melbourne in 2011 where approximately 100 protesters who refused to leave the area were fenced and cordoned inside the city square. It was again noted that the protest had been entirely peaceful until kettling and mass arrests were deployed .

How has kettling been used in other countries?

In the United Kingdom kettling has also come under heavy criticism, yet has been ruled a lawful technique.

In Austin & Ors v United Kingdom police kettled around 3000 people for 7 hours in the rain without access to food, water or toilets. In Adam Castle, Rosie Castle & Sam Eaton v Commissioner of Police for the Metropolis, teenage student demonstrators were kettled for around 6 hours in below-zero temperatures. The kettle allowed some demonstrators to rob others within the kettle while items in the kettle were set on fire. Despite these conditions, the kettles in both Austin and Castle were held to be lawful and proportionate.

The European Court of Human Rights has also ruled that kettling is lawful. In a case brought before the European Court of Human Rights, police had cordoned off an area in Oxford Circus, London, during an anti-capitalist/anti-globalisation demonstration. The court found that the use of of the kettle was justified by the continued violence of a portion of the kettled protesters and that the kettle was the least intrusive measure to be applied. The court further held that police did not need to distinguish between protesters and bystanders who were caught in the area when implementing the kettle.

However, the court also determined that the practice would only be justified by the “impending threat of serious disorder” and should only be used to “prevent serious injury or damage.” Additionally, it was identified that the technique should not be used to discourage and limit protests.

Results of a kettling

Those kettled may eventually be released from containment, or the kettle may be used to enable police to arrest those within it. To avoid being caught in a kettle, it may be possible to move away from the area quickly if it is clear that the police are beginning to contain people. However, kettles can also occur quickly, making it difficult to escape being contained.

While a kettle may not always result in mass arrests, kettling can be viewed as a mass arrest tactic of sorts by detaining those kettled to a particular area without the option to leave. Kettling can also be used as a way to deter people from protesting and may have the deeper impact of infringing the right of freedom of political communication and expression.

There is a delicate balance between the rights of individuals to not be deprived of their personal freedom and the expectation that police act to protect public safety. However, police should not be able to use the protection of public order and safety as a justification of unnecessarily coercive techniques. Each situation should be judged separately and police should take into account each individual caught in the kettle and distinguish between bystanders not involved in the protest, peaceful protesters, and those potentially causing the disruption.

Courts have asserted that given the often dangerous and tension heightening effects of a kettle, the technique should also only be used as a last resort. This view was outlined in R (Moos and McClure) v Commissioner of Police for the Metropolis where the Administrative Court held that kettling should only be used “when the police reasonably believe that there is no other means whosoever to prevent an imminent breach of the peace… The test of necessity is met only in truly extreme and exceptional circumstances.”

As acknowledged in this case, measures that may be less intrusive on the personal liberty of individuals and which may result in less dangerous conditions should be used first. While the decision in R (Moos and McClure) v Commissioner of Police for the Metropolis was overturned, the comments provide a potential benchmark that could be utilised before the use of a kettle. Such a benchmark and limitation would reduce the broad use of the technique, minimising the risks associated with the technique and ensuring that the right to freedom of political communication is upheld.

Although police claim that kettling is a necessary technique to reduce the threat of violence, in reality it is yet another use of force tactic that serves their operational objectives to control a protest rather than anything to do with public safety. Kettling is used to control and contain protests that police perceive to be uncooperative or defiant. Its use impacts directly upon people’s ability to protest in public space and it effectively suppresses the freedom of political expression and the right to assemble.

Kettling should hence be strongly condemned by all those who value these rights and it should not be used in a state which has a Charter to specifically protect them.